This summer I had my first experience collaborating with a choreographer and dancers, and I completely fell in love with the process and the idea of writing music for dance. Back in 2017 my friend Maura Villanueva, who directs Joffrey Texas, a summer program for young dancers, asked if I wanted to write a piece for their 40th anniversary season. Of course I said yes, because I like trying new things and I like it when my friends ask me to write music for them.

Anyway, I asked if I could talk with the choreographer, and they were still locking one down for the commission, so started doing some of my own research. Here are some things I learned:

Eventually Joffrey Texas hired the choreographer Katie Cooper, of Dallas’s Avant Chamber Ballet, and I couldn’t have been luckier. First of all I watched a bunch of her work and just really, genuinely liked it. Then she and I got on the phone and I asked basic things like “should I avoid crazy time signatures?” and “do you read music or shall I send you MIDIs as we go or what?” From this conversation came on major insight that I figured I’d share. She told me that fast, rhythmic music is better for larger groups of dancers because it makes it easier to sync their movements, while slow, lyrical music is best for solos, duets, and trios. Regarding my time signature question, she just said “I’m into Ligeti so try me.”

I’d had a five note pattern running through my head for months, and was thinking about how these dancers would probably be at the very start of their careers or deciding whether or not to study dance in college, and about how everybody grows at different rates, then turned the page in an astronomy calendar I have and came across this gorgeous photo of the sky over Wotan’s Throne at the north rim of the Grand Canyon. It had a caption that read,

The last glow of sunset is still visible as the stars begin to shine over Wotan’s Throne. This beautiful, transitional phase, called the blue hour, lasts for just short periods of time after sunset and before sunrise.

That sold me on the name Blue Hour for the piece, and on the idea of taking that five note figure and repeating it at different rates of speed simultaneously. I inverted it, spread it across five octaves, and put it in the piano in whole notes, then put the same thing in the vibraphone 3.5 notes (7 eighth notes long) so that they’d gradually move apart. An ostinato with an improvised kind of rock rhythm moves from the first two notes of the figure, to the next two, to the next two, and so on. The structure of the entire piece is really made by transposing all of that up or down following the pitches from the initial idea. When it all finally comes together at the end, everyone is playing the same material but starting on a different beat, so you get a sort of wall-of-the-same-line a la Electric Counterpoint.

Anyway. I sent it off. A month or so later Katie called me to ask about how to count a single measure. A few months after that, having heard almost nothing except that it was going well, I showed up for a rehearsal two days before the premiere. AND LOVED IT. She totally “got” the music, and heard things in it that I hadn’t. Her lighting idea almost coincidentally matched the tone of the photo. The one spot I didn’t agree with her decision on (and we ended up changing very very very slightly, with her permission) was the one spot that I’d gone over a million times and had had a lot of trouble with, so in hindsight it made sense that that would come across to someone really going over the piece in detail.

I want to re-orchestrate it a little (more strings would make it a bit richer, I think), but after seeing her work on it I’m now totally sold on working with dancers or other visual narrative art sorts of folks. That first rehearsal was an aha moment for me. So, you know, if you want to do a thing, drop me a line.

Oh yeah, here’s the video. Thanks for making this possible, Mauro and Katie! 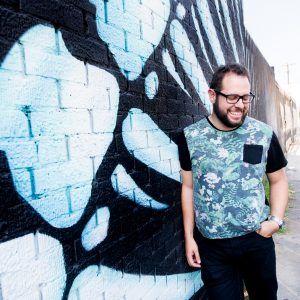